12.17.20 - At Gardner Camp, we spend a lot of observation time watching Saturn and Jupiter move across the night sky. We show our students in the StarLab how both planets move closer and closer together as they travel their orbital path. On December 21, 2020, Jupiter will catch up to Saturn, and as it passes by, they will give us a rare opportunity from Earth to see a very close conjunction. In fact, the last time these two played together was 800 years ago. 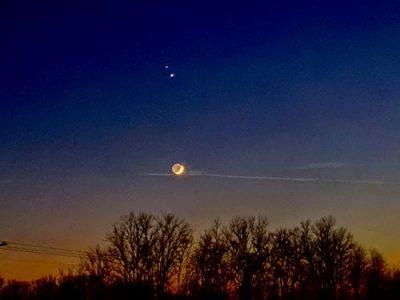 Some refer to this event as the Christmas Star. When Saturn and Jupiter come in close conjunction, they will create the illusion of a bright star just above the southwest horizon. Don't linger that night because the time window to watch this is between 5:30 and 7:00 pm before they both dip below the horizon out of sight. This event again raises the question, was there a Christmas Star, a star that signaled the birth of Jesus as believed by the Christian faith? This question is one many throughout the centuries have wondered about. Is the story of Christmas as written in the Bible true? Was there a star?

I always like to ask people this weighty question about the Christmas story. Why would Persian astronomers (Maji) get on their camels, travel over 700 miles to Jerusalem, and ask where they could find the newborn King of the Jews? In nativity sets many put up in their homes at Christmas time, why are three "Wise Men" included? Who are these guys, and why are they so interested in finding Jesus?

This article isn't going to address the "why," but we want to look at the "what" in the story. What was it that caused the Wise Men to travel at the time they did and head toward Jerusalem? There were prior events that caught the wise men's attention. But something happened that caused them to move. Many say it was the appearance of a star..............

Early Christian astronomers and mathematicians such as Kepler, Newton, and Copernicus also wondered about the Christmas Star. These men are essential to the science of astronomy and deep sky observation. Kepler believed the universe and movements were mathematically precise. Kepler discovered the math formula to predict the motion of the planets. He is the father of the Laws of Planetary Motion. Using Kepler's formula, one can calculate the night sky in the future as well as the past. Newton refined Kepler's laws and used them to look for the Star of Bethlehem. He couldn't find it. 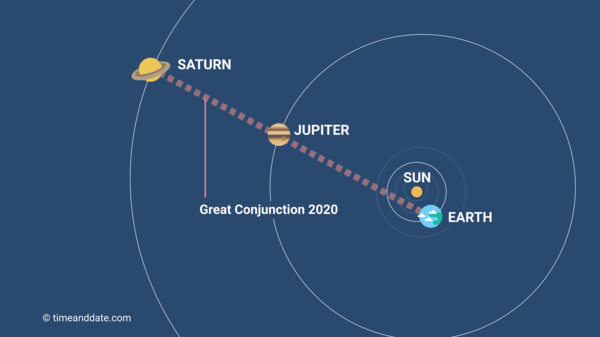 At Gardner Camp, the telescopes and the projection system we use in our StarLab all operate using software running the math discovered by Kepler. With the use of high-speed computers, we can animate the night sky on any date, at any time, and from any location on Earth. Our telescopes know how to find thousands of objects in the night sky because of the math. We can show our students what the night sky looks like in the present and future. We can also show what the night sky looked like in the past. What does our software see when we look into the night sky back during the time when Jesus was born? If scientists like Kepler and Newton couldn't find the star, how can we find it? It all depends on when you start looking. A significant character in the Christmas story as written in the Gospel of Matthew is Herod the Great. He is the first person the Wise Men contacted when they arrived in Jerusalem. The Wise Men asked Herod where they could find the newborn King of the Jews.

From the story, Herod was the one who eventually had all the male boys in Bethlehem between the ages of two and under murdered, hoping to kill Jesus along the way. Jesus and his family were spared as they were warned in a dream to flee to Egypt until it was safe to return. Herod soon died, and it was safe to leave Egypt.

The date of Herod's death is the starting point to finding the Star of Bethlehem. The question is, when did Herod die? Kepler and others thought the year was 4 BC, as described by ancient historians like Josephus. For many years historians inferred 4 BC as the year Herod died, until recently. But as Kepler and Newton discovered, using 4 BC as the starting point to run the math, a bright Star as described in the Bible does not show up. Does this mean the math was wrong? Maybe the Star didn't exist? Or perhaps the starting point is wrong? Maybe Herod didn't die in 4 BC!

At Gardner Camp, we use the software Starry Night to animate the night sky in the StarLab. Using Starry Night and setting the location to Baghdad, Iraq (ancient Persia), assume the year Herod died was 4 BC, and look for the Star in the year 5 BC, nothing like the Star as described in the Bible appears. Even using 2 BC and 3 BC as years for Herod's death, nothing special takes place. But when we use 1 BC as the year of Herod's death, the night sky explodes with evidence in 2 BC as the year Jesus was born, or at least, the appearance of a Star never seen before or since. The date to pay attention to is June 17, 2 BC. There was a conjunction of two objects in the sky, Jupiter (the King planet) with Venus (the mother planet).

The two brightest planets in the night sky came together to create the brightest object in the sky ever seen before. From Persia, the conjunction was in the western sky, in the direction of Jerusalem. Might that be the Star talked about in the Bible that caused the Wise Men to travel to Jerusalem?

The conjunction between Jupiter and Venus took place in the constellation Leo (The Lion). Unlike the conjunction coming on December 21 of this year, the Christmas Star of Jesus in 2 BC was much more spectacular and symbolic. The two planets came together, connected without blocking each others light. The scene almost looks like a woman carrying a child.

This view (right) is from Baghdad, Iraq (Persia), 2 BC looking in the western night sky over Jerusalem. Again, using our mathematically precise software, we zoom in close to see what was going on. The Wise Men saw only one object in the night sky. Could this be the Star of Jesus that the Bible talks about and the Wise Men used to seek the newborn King of the Jews? If so, does it mean that the actual date of Christmas is June 17, not December 25 as observed in the Christian tradition? 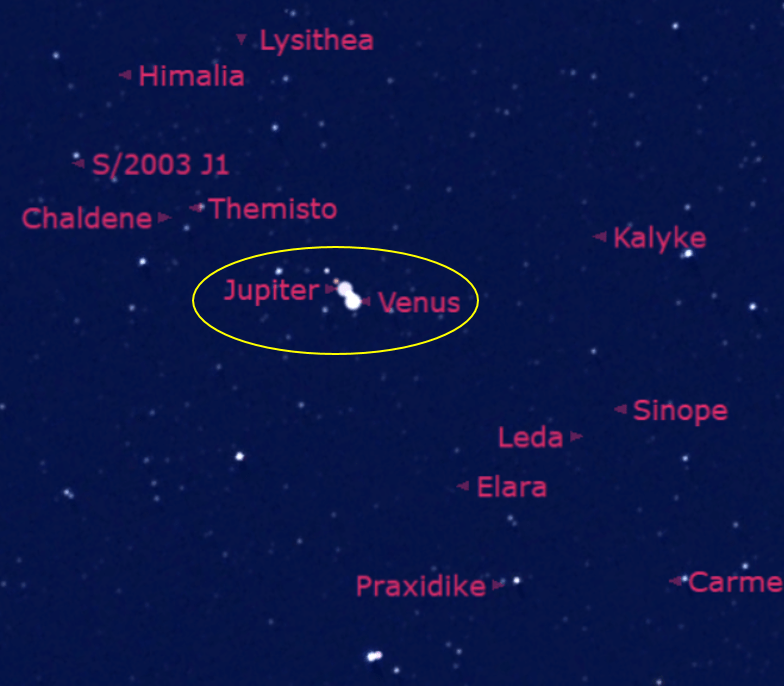 We find it interesting to test history with astronomy.  As the story in the Christian faith goes, when the Magi (Wise Men) show up in Jerusalem, they ask a question of Herod. According to Matthew 2:2, they ask, “Where is the one born King of the Jews”. Three points of evidence come from that question:

Matthew also records an interesting fact - Herod didn’t see or know anything about the star; nor did the Jewish authority. Everyone in Jerusalem was concerned when they heard about the Magi.

5. The star appeared at an exact time.

6. Herod didn’t know when it appeared. He had to ask. 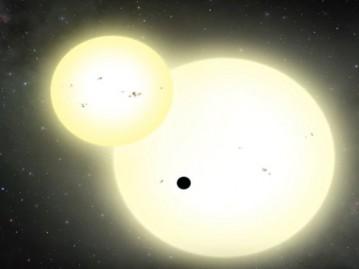 Herod sent the Magi onto Bethlehem. Matthew records the last three qualifications of the star: He sent them to Bethlehem and said, “Go and make a careful search for the child. As soon as you find him, report to me, so that I too may go and worship him.” After they had heard the king, they went on their way, and the star they had seen in the east went ahead of them until it stopped over the place where the child was. Matthew 2:8-9

7. It endured over a considerable period of time. The Magi saw it as they traveled from Babylon to Judea.

8. It went ahead of them as they traveled from Jerusalem to Bethlehem. You might not realize, but this doesn’t mean the Star was needed to guide the travelers to Bethlehem. Bethlehem was (and is) just five miles south of Jerusalem on the main road. They couldn’t miss it. No, the Star appears ahead of them as they trek south, not so much as a guide, but as further confirmation of the signs they had seen.

9. The hardest of all, The Star stopped! Can a star do that? No, but planets do. We know it as retrograde motion. Maybe what the Magi saw was not a star, but a planet they felt was connected with the story.

Was there a real Star of Bethlehem? Can we use science to test this? For thousands of years men and women of faith believed, but also wanted to know for sure, if it really existed. Contact us about our presentation using our software that might shed greater light on the facts during this historical time.

Gardner Camp has a presentation about the events in 2 BC leading up to the "Christmas Star" appearance. If you, your organization, or church is interested in hearing the entire presentation, contact Jen Tyler at jen@gardnercamp.org. We love to share the night sky and its wonders with anyone interested!